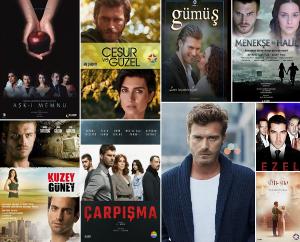 Which one is the Best Tv Series of Kıvanç Tatlıtuğ?

Kıvanç Tatlıtuğ: Kıvanç Tatlıtuğ (born 27 October 1983) is a Turkish actor, model, and former basketball player. He is one of the highest-paid actors in Turkey and has won many awards, including three Golden Butterfly Awards and a Yeşilçam Cinema Award. Tatlıtuğ won the pageants Best Model of Turkey and Best Model of the World in 2002. Tatlıtuğ has established himself as a leading actor of Turkey with roles in several of the highly successful television series, that includes Menekşe ile Halil (2007–2008), Aşk-ı Memnu (2008–2010), Kuzey Güney (2011–2013) and Cesur ve Güzel (2016–2017), all of which garnered him critical acclaim and international recognition. Wikipedia

We choose the Best Tv Series Kıvanç Tatlıtuğ has acted in. You can vote only once in 24 hours.