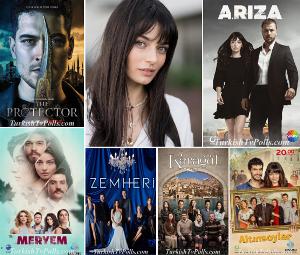 Which one is the Best Tv Series of Ayça Ayşin Turan?

Ayça Ayşin Turan: Ayça Ayşin Turan (Turkish pronunciation: [ajˈtʃa ajˈʃin ˈtuɾan]; born 25 October 1992) is a Turkish actress. Her mother is from the city of Sinop. Her maternal family is of Turkish descent, all of whom immigrated from Thessaloniki to mainland Turkey after the Greeks reconquested the city when the Ottoman Empire collapsed. Her father is from Kastamonu. Turan became interested in acting and violin at a young age and she later studied Film at Department of Radio, TV and Cinema, Faculty of Communication, Istanbul University. Wikipedia

We choose the Best Tv Series Ayça Ayşin Turan has acted in. You can vote only once in 24 hours.