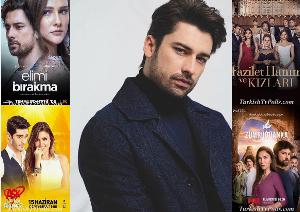 Which one is the Best Tv Series of Alp Navruz?

Alp Navruz: Alp Navruz (born 15 January 1990) is a Turkish actor and model. Navruz was born in Istanbul in 1990. He is graduate of Yıldız Technical University with a degree in Turkish Language and Literature. Navruz’s interest in acting began at a young age. After being cast in roles on stage during his primary school years, he took acting lessons from Altan Erkekli and Cihan Ünal. Meanwhile, he continued his career as a model. He made his cinematic debut in 2015 with a leading role in Ceberrut. In 2016, he was cast in the TV series Aşk Laftan Anlamaz. His first major role came with Fazilet Hanım ve Kızları, which made him known in Turkey and earned him the Best Debut award at the Turkey Golden Tourism Awards. His role in TRT 1 series Elimi Bırakma as Cenk further contributed to his career. Wikipedia

We choose the Best Tv Series Alp Navruz has acted in. You can vote only once in 24 hours.