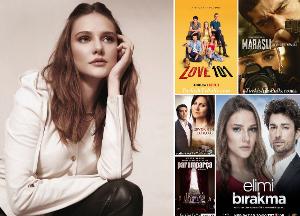 Which one is the Best Tv Series of Alina Boz?

Alina Boz: Alina Boz (born 14 June 1998) is a Turkish actress. She is known for her role in television series Paramparça and Maraşlı. Alina Boz was born on 14 June 1998 in Moscow, Russia. Her mother is Russian and her father is a Turkish immigrant who was living in Bulgaria. She started her acting career in the 2013 series Cesur Hemşire as Canan. In 2014, she worked in the series Paramparça as Hazal along with actress Nurgül Yeşilçay. In 2016, she appeared in the movie Kaçma Birader as Melis Kahvaci. In 2017, she had a role in the movie Böluk. In 2017, she worked in the series Sevdanın Bahçesi as Defne. In 2018, she was cast in the series Vatanım Sensin as Princess Anastasia Romanova, and in the same year she had a leading role in the series Elimi Bırakama. She had a leading role in the Netflix original series Aşk 101 and portrayed the character of “Eda”. In 2020, She starred as Mahur opposite Burak Deniz in television series Maraşlı. Wikipedia

We choose the Best Tv Series Alina Boz has acted in. You can vote only once in 24 hours.

One thought on “The Best Tv Series of Alina Boz”