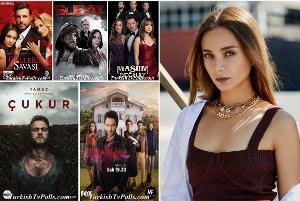 Which one is the Best Tv Series of Damla Sönmez?

Damla Sönmez: Damla Sönmez (born 3 May 1987) is an award-winning Turkish actress. She is of Circassian descent. After completing St. Joseph French High School, she started her theater studies at Paris Sorbonne University and completed Yeditepe University in Theater Department. Damla Sonmez, who is involved in many productions on Turkish television, studied semi-timed 2 years violin and 1 year piano in Mimar Sinan University State Conservatory. She worked with Stuart Burney at the Black Nexxus Academy in New York.
In 2009, she starred in Bornova Bornova and won the “Best Supporting Actress” at the 46th Golden Orange Film Festival, alongside other awards at the Sadri Alışık Awards and the Flying Broom International Women’s Film Festival. She became the Young President of the festival at the 18th Broom Broom Women Films Festival in 2015 and she won the 21st Golden Boll Film Festival and the Best Actress Award at the Milano International Film Festival (MIFF) for her role in the film “Sea Level”.
In her television career, she played supporting roles in hit series Emret Komutanım, Gece Gündüz, Türkan. A turning point in her television career was when she played as bride who loss of memory in unique series “Şubat”. Her first leading role is “Bir Aşk Hikayesi” adaptation “I’m Sorry, I Love You”. Wikipedia

We choose the Best Tv Series Damla Sönmez has acted in. You can vote only once in 24 hours.