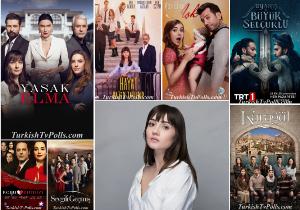 Which one is the Best Tv Series of Sevda Erginci?

Sevda Erginci: Sevda Erginci (born 3 October 1993) is a Turkish actress. Erginci began acting at the age of 15, taking part in the play Paki ve Sevgi Çiçekleri for Semaver Company, and then took acting lessons at Kenter Theatre. In 2012, she was cast in Koyu Kırmızı alongside Özgü Namal and Ozan Güven, and in the same year appeared in the historical drama Veda. Between 2013–2014, she portrayed the character of Ayşe in Karagül. She made her cinematic debut in 2015 with a role in Uzaklarda Arama, written by Onur Ünlü. After playing main roles in Hayat Bazen Tatlıdır and Ver Elini Aşk, she was cast in Yasak Elma, portraying the character of Zeynep Yilmaz. In 2019, she played the role of İpek Gencer in Sevgili Geçmiş. Wikipedia

We choose the Best Tv Series Sevda Erginci has acted in. You can vote only once in 24 hours.